Holy smokes, Wrestlemania is just 17 days away! Do you even have your WM playlist ready yet?? Have you gotten back with Jake The Snake about appearing at your WM Saturday Brunch? What I’m asking is…are you ready?

If you missed the last edition, we went through the first 11 ways to get ready for Wrestlemania 33. Today, we’re back with another 11.  So let’s get to it!

If you have the WWE Network, there are tons of the old WWE documentaries on there rebranded as Beyond The Ring (The Rise & Fall of ECW and CM Punk: Best In The World are top notch).  If you want to go deeper, though, there are several good independent docs to check out.  Last year’s The Resurrection of Jake The Snake is on Netflix and was pretty good. Beware though, it will hit you right in the feels. You also can’t go wrong with the original wrestling doc, Beyond The Mat, which got us inside the Montreal Screw Job, endeared Mick Foley to an entire generation of wrestling fans and showed us what a mess Jake Roberts was in the first place. You could also watch this really sad mini-doc on Kamala.

#13 – Play with your old wrestling figures

Look, they’re just sitting there.  You’ll never throw them out and toys aren’t meant to be decorations.  No one is gonna catch you – it’s time to piledrive that old Hulk Hogan wrestling buddy like you were 8 again.  My favorite toys of all time has to be a tie between the old Playmates Ninja Turtles and the WWF Hasbro figures.  My love for both was probably why Shredder and Super Shredder were multi-time MBWF Tag Team Champions.  I don’t know what your favorite wrestling figs were. Maybe the bulky LJN WWF figures, maybe the awesome Playmates ECW line from 2000, maybe those weird bendable WCW figures from the early 90’s. Whatever figs you have hiding in your closet, it’s time to stop imagining that they come to life like Toy Story for a battle royal every night and actually have that battle royal. 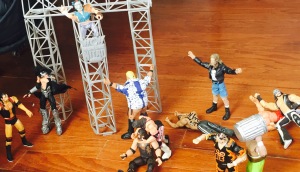 I got a few hours to create my own WWE 2k17 tournament the other day and it was awesome. If you haven’t played a wrestling game in a while, the latest WWE game for XBox One/PS4/PC is a good way to jump back in.  Tons of characters and game modes, you can play this for hours.  I put together an 8-Man Gold Rush for the old WCW World Heavyweight Title and it was epic.  The fact that there were enough old WCW wrestlers to create a tournament like that was awesome enough.  Add the fact that I could have it in the Clash Of The Champions or WCW Saturday Night arena and I felt like I was rewriting history. If you’re not into spending money on a game, you can also download WWE Champions for your phone for free. 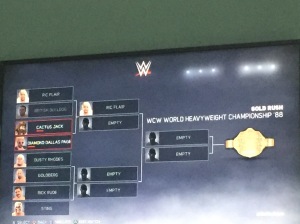 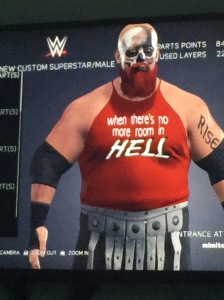 WMX7 is one of my favorite Wrestlemanias of all time (find out more by reading my review of the Rock/Austin II main event). From the opening match, featuring Chris Jericho’s WM debut against William Regal, to the final moments of Stone Cold and Vince McMahon’s evil union, WMX7 was truly a thrill ride. The first WM meeting between Taker and HHH? The GIMMICK BATTLE ROYAL? Freaking RAVEN? Why are you not watching this right now.  It was also just the second WM I got to watch live (with my college roommate Steve), so it holds a special place in my heart.  This mania was released right smack dab in the middle of the DVD era and I remember buying it as part of the big Wrestlemania Anthology 20-disc DVD set that WWE put out in like 2005. Watching those DVDs was a big part of my Wrestlemania celebrations until the WWE Network debuted.

#16 – Listen to a wrestling podcast

There are a few great wrestling podcasts out there today, and Wrestlemania season is when they shine. If you wait until the week of Wrestlemania, a lot of them will be down in Orlando to broadcast from the heart of everything, but WWE has also been good in recent years about sending their talent to do podcast interviews as the date gets closer.  The best podcasts are by people who were in the business, like the the Stone Cold Podcast, The Ross Report and the Taz Show (technically a radio show that is posted as a podcast afterwards).  This definitely isn’t a shameless plug for the new podcast I started with my brother.

Nothing says I’m ready for Wrestlemania like hitting the gym and getting totally ripped. Get pumped. Get swolt. Become a physical specimen.  If you’re tall, look like they’re prepping to feed you to Hulk Hogan at Survivor Series 1989. Get so jacked that there are rumors you’ll be taking on Brock Lesnar at WM34. Put Scott Steiner to shame. But don’t use steroids, because if you’re juiced up, your gas tank ain’t right.

As I’m writing this, the WM33 match card is at least 80% set.  That shouldn’t stop you from thinking about what could have been, though.  Fantasy book the greatest Wrestlemania of all time.  Do the participants have to be on the current WWE roster? Do they even have to still be alive? It’s up to you!  What if 80’s Hulk Hogan took on John Cena?  What if AJ Styles faced Ric Flair in his prime? What if Kevin Owens and Sami Zayn got to be the main event?  What if New Day faced The Elite and Demolition interfered?  What if CM Punk came back??? (Pretty much the basis of all my fantasy booking).  Also, it doesn’t count if you don’t book the storylines. Bonus points if you play your fantasy WM card in WWE 2k17.

#19 – Solve the mystery of the Figure Four Leglock reversal

Ric Flair has made the Figure Four Leglock maybe the most recognizable submission move in wrestling history.  Flair utilized a lot of (ahem) flair when locking his finisher in and it’s pretty obvious that this move hurts your opponent’s leg.  At some point, though, Flair’s opponents figured out you could reverse the Figure Four by turning over onto your stomach.  Not only did this alleviate the pressure on the opponent’s leg, but it also turns the move against the Figure Four applier by placing what we can only assume is an even greater pressure on their leg.  We’ve seen it a million times by now and we’ve just accepted this as fact.  But WHY? If you think about it and actually look at the reversal, there’s no logical reason why a reverse Figure Four would do anything but still hurt – your leg is still in the “4” position!  You’ve got to do a Mythbusters on this.  Inquiring minds wants to know.  Find a willing partner (or an unwilling smaller partner) and do some WM science.

#20 – Drive around your high school, windows down, with Diesel’s entrance music blaring from your truck

Maybe I’m the only person who thought this was cool.

Maybe you’re new to wrestling fandom, or maybe there are eras that you’re shaky on. I remember spending a whole summer devouring old articles by people like Scott Keith, The Scotsman and Hyatt (shout out to the original IWC), getting my education on the history of wrestling.  Today, it’s so much easier to find specific info. The internet totally has you covered!  Don’t know why Vince McMahon hates Nailz?  Read the Nailz Wiki!  Didn’t understand what I meant by “Montreal Screwjob”? Read the Wiki! Want to know who is in the WWE Hall of Fame? Read the Wiki? Fuzzy about if Bret Hart was ever a member of the nWo? Read the list of nWo members Wiki!  If you fall down a wiki hole for 3 or 4 days, though, don’t blame me. 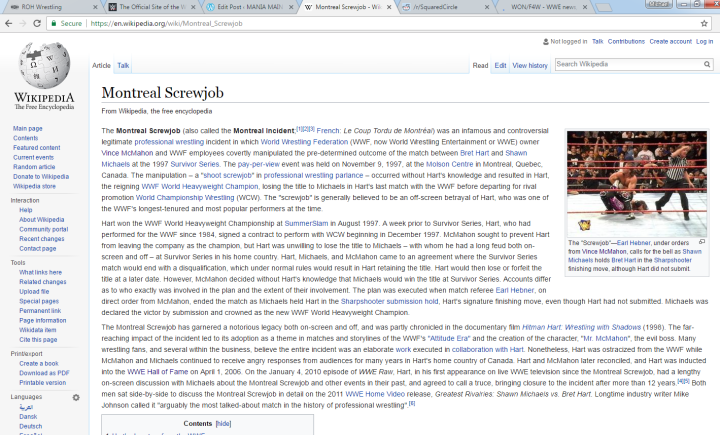 Today is 3/16.  Stone Cold Day. I hope you’re celebrating properly by tossing back some Steveweisers, throwing out stunners (#1 on the list: your boss) and Stone Cold saluting everyone in sight. Or at least interrupting someone a dozen or two times with a well placed “WHAT?”

The great thing about Stone Cold Day is Wrestlemania is always just 2-3 weeks away.  If you didn’t start ramping up before SCD, today is THE day to start.  Don’t let WM33 sneak up on you like an RKO. Get pumped!

That wraps things up for today, but I’ll be back soon with Part 3 – 11 last things you can do to get ready for Wrestlemania 33!