If you haven’t yet, check out the previous installments of the POP! WWE Vinyls review!

Wow! Here we are already, the fourth installment of POP! WWE where we will take a look at vinyls 16-20. Once again we received a very solid offering from Funko, including another Diva and four legends. It is along this time that I really began to grasp what collecting pops was about for me and began to narrow my concentration down to mostly just WWE pops. It was nice to finally have a grasp as to what I should be looking for when looking for pops, what was the significance of exclusives and I was introduced to poppriceguide.com to begin tracking my collections. The analogy I like to use is I went from having a Funko POP! job to a Funko POP! career.

This week during the review I get to talk about one of my favorite pops across all genres and something that drives me insane as a box collector. I’m going to use photos from my personal collection, the quality is not all that great (see the reflection of my Misfits shirt on Paige above) but I feel like it adds more of a sense of authenticity, so if you like it or not, hey let me know! Enough with that, let’s move on to the review! 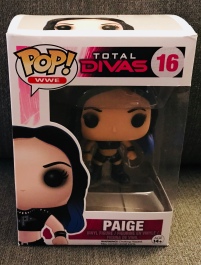 Fittingly enough after just making her in ring return this past Monday, it is the “Anti-Diva” Paige. I have to say I’m not a very big fan of what the Paige character has evolved into (how can all these arena’s possibly be her house?) but this is a very fun pop.

Funko did a great job of highlighting the specifics about Paige’s look that separated her from the rest of the women’s roster (although AJ Lee was still around, and the two had a nice feud until AJ’s departure). Paige is featured in all black apparel  including the Paige (<P>) logo’ed t-shirt along with a studded belt, some leather bracelets and blue tipped hair. Funko further emphasized the difference between Paige and her Diva peers by releasing this pop alongside Brie and Nikki’s. It is probably also important to mention that Brie, Nikki and Paige were the only women to have their pops released as part of the Total Divas collection. The AJ Lee pop and all subsequent female superstar pops have just been released under the WWE logo (even Eva Marie). 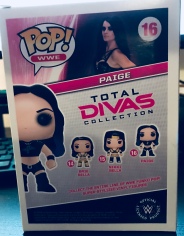 All in all this is a great looking pop and at $27, building decent value. I also project that the value is likely to be on the rise due to the abandonment of the Total Divas collection name.

The GOAT himself makes his way in at 17. I supposes this is the part where I should talk about Rolex wearing…kiss stealing….etc etc etc. If you have found this write-up, then you know all that stuff, right? So let’s talk about this pop. 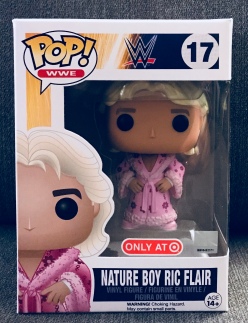 Naitch is our first POP! WWE Target exclusive and I was lucky enough to stumble upon this guy randomly at the store in Christiansburg, VA. It was hidden among some office supplies, so I think someone was trying to hide it until they could return. Ric Flair and Bobby Heenan were right up there with Skeletor and Darth Vader as my childhood antagonists, so of course now they are two of my favorites of all time (hear that Funko…we need a Bobby “The Brain” Pop!), so I was really stoked to find this pop just sitting there on the shelf. I couldn’t wait to get back to work and share my sweet find with fellow Flair enthusiast (what up Whitty).

The pop itself features everything you would want in a Ric Flair pop, the blonde hair and extravagant robe which are both true Nature Boy trademarks. The level of detail on this robe allowed me to trace it back to Clash of the Champions IV, where he teamed with Barry Windam to take on The Midnight Express and I also spotted this particular robe at his World Title defense against Lex Luger at Wrestle War 1990. This type of detail really bumps up my enjoyment of a pop and I hope it will one day really bump up the value of this little guy.

There are somethings that just do not make a lot of sense to me, how does Nick Cage keep getting work after his Ghost Rider roles, why will McDonald’s not bring back chicken fajitas, and how on Earth is the Piper pop half the value of Flair’s? I really expected a minimum value of $18 for this guy as it was released the same time as Flair and Piper is also a legend.

Aside from the value, this is a great looking pop displaying the iconic Piper look. Sporting longer hair, “Hot Rod” shirt, kilt and boots, this Piper has the look of the majority of his WWF run. Although I love this pop, this was a Target exclusive as well but as you can see the box does not have the sticker. I’ve ran into this at multiple locations (Walgreens and Toys R Us most recently), and as a box collector it is very frustrating. I’m not sure if there is any real detriment to the value of the pops, but it is disheartening none the less.

*Bonus* Piper related memories. The first PPV I ever watched live was Superbrawl VII, which was a birthday gift from my parent and I was also able to invite my friends Craig and Good Brother Michael up to enjoy the show with me. I just remember thinking after seeing the screw job finish to Piper vs Hogan, “Jeez, I have to be up early for school.”

You know how your Mom is always like, “You only have to wear that sweater when *insert relative here* is around.” Well for his birthday, I bought my dad a Hot Rod t-shirt (his name is Rodney), I’ve never seen him wear it, growing up Smith.

I said last time that I would discuss my first 9.90 rating, and here it is with The Man Called Sting! During the mid to late 90’s, over 18 months Sting owned the wrestling world, while not landing a single pin fall. Was Sting NWO, would Sting save the WCW, the answer was no then yes and no one could save WCW.

Let me continue by saying, I LOVE THIS POP!!! It is my favorite in my collection, even though Sting is not my favorite wrestler. Funko chose “Crow” Sting and Wolfpack NWO Sting as their inspirations for these pops and they are great! My favorite part is how they painted around the eyes to give the illusion that these pops have large eyes instead of the beady little pop eyes. The standard offering is the white face, crow paint Sting we all remember kind of beating Hulk Hogan at Starcade ’97. Gamestop was granted another exclusive, giving us the Red and Black Wolfpack Sting.

While not great enough to save WCW from itself, these pops will make a great addition to your collection. While the value is not quite there yet, the awesome look will more than make up for what they lack in that department. As a side note, I really think the world needs a “Crow” Sting sporting a leather duster instead of just the tank topped ring gear. 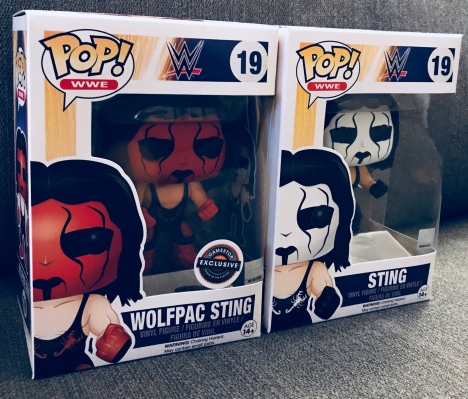 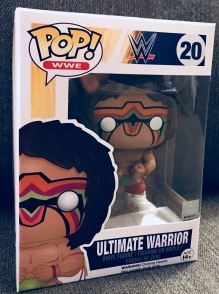 Coming in at #20 in the series is the other half of “The Blade Runners” the Ultimate Warrior. I can remember watching Superstars one time and being so excited that the Warrior was running out, that I started shaking the foot rail on my bed as he did the ropes. I ended up getting so into it that I hit my head on the rail and fell in the floor, ah good times.

Funko provided us with what you would expect from a Warrior pop, wild hair and brightly colored face paint and ring gear. I think it is pretty sweet they gave this guy white eyes, a clear departure from the typical black-eyed pops in the rest of the line up to this point (spoiler there are a couple more to be discussed later). I can’t help but to think about how great a white-eyed Undertaker in his kneeling position pop would be! Anywho, this is another time when the pop is exactly what you want but lacking any real surprises to put it over the top.

So that wraps up my look at POP! WWE 16-20. I have to say this is one enjoyable set of pops and once again, they bring up a ton of memories from the past and the not too distant past. Coming up we will take a look at 21-25, which will be a short week for me as there is mysteriously, no 22?!? I will also say next time I will tell you about the BIGGEST over site in the POP! WWE series (so be prepared for a rant). Until then I’d love to know what you think, hit me up on the Twitter @chuckonwrestling or leave a comment below. Thanks for reading!