Welcome back to another edition of Mania Main Thoughts.  Each article, we’re taking a look at a single Wrestlemania main event from the past.  We’ll look at the build leading up to the show as well as the match itself. It will be magic.

Last time, we looked at last year’s main event of Roman Reigns vs The Undertaker in what we now know was not the The Dead Man’s final Wrestlemania appearance.  If you didn’t check it out (or missed any of the previous articles) just click one of these handy links!

Now let’s do this!

The story behind WMXXVIII’s main event (man, that’s a lot of Roman numerals) goes all the way back to WMXXVII.  Live from Atlanta, GA, the main event would feature none other than The Miz defending the WWE Title against John Cena.  But Miz took a backseat to the man who would serve as Mania’s host that year – The People’s Champ himself, The Rock.

The Rock, who left WWE to become perhaps Hollywood’s most bankable star, had not appeared in a WWE ring in over 6 years.  During that time, Cena, who had ascended to the mantle of WWE’s biggest star in Rocky’s absence, would take jabs at Rock, questioning his dedication to the business that made him.

With Rock announced as WM host, the verbal war between Rock and Cena (and to a lesser degree, Miz) began.  On the final episode of Raw before WMXXVII, Rock and Cena finally met face to face on WWE TV.  Miz interrupted and violence ensued – ending in Rock eating an Attitude Adjustment courtesy of John Cena.

With Miz a third-wheel in the Rock/Cena storyline, it seemed like a foregone conclusion that Big Match John would walk out of WMXXVII as the 8-time WWE Champion.  Imagine the crowd’s surprise, then, when both Miz and Cena were counted out in the night’s main event.  A double count out to end Wrestlemania? I don’t think so.  The Rock’s music hit.  Apparently being Wrestlemania host comes with a great deal of power, because Rocky restarted the main event, dubbing it no count out, no DQ and no time limit.

Sensing this would work in favor for Cena, imagine again the crowd’s surprise when Rock made his way to the ring and hit John with a Rock Bottom, allowing The Miz to score the pinfall and retain his WWE Title.  It was just the third time in Wrestlemania history that the show ended with a heel victory. 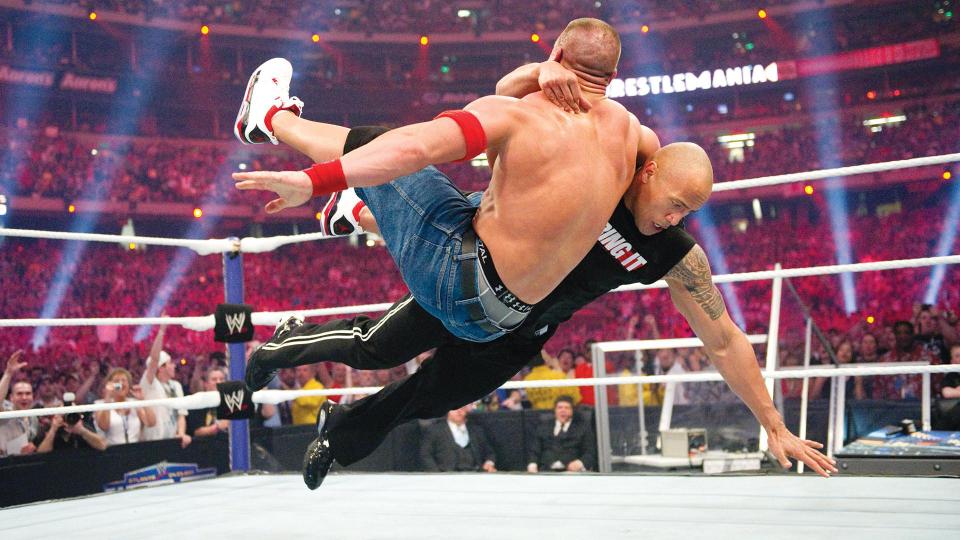 The next night on Raw, Cena and Rock met face to face again.  In a historic move, Cena agreed to go one on one with The Great One at WMXXVIII – nearly a full year away.  It would be the first time the WWE would spend an entire year building to an announced WM main event. It was billed as “Once In A Lifetime”.

Cena would go on to take The Miz’s WWE Title, and interrupt Rock’s Raw birthday celebration to declare his intentions to hold that title all the way to WMXXVIII and defend it against The Rock.

That didn’t happen, thanks to CM Punk.  But that’s another story.

In late 2011, Cena would begin feuding with the Awesome Truth – the team of The Miz and R-Truth, who were bound together by a belief that there was a WWE-wide conspiracy keeping the pair out of the main event.  Cena was set to team with Zack Ryder at Survivor Series, but the Awesome Truth took Ryder out with a savage beatdown.  The Raw GM announced that Cena could replace Ryder with anyone he wanted.  He chose The Rock.  The duo would defeat the Awesome Truth at Survivor Series 2011 in Rock’s first WWE match since WMXX.  Post-match, Cena would eat another Rock Bottom.  With Wrestlemania just months away, the feud was beginning to heat up.

Of course, the best part – THE BEST PART – of this feud were the promos.  In Rock and Cena, you have two of the best talkers in WWE history.  You also have two guys who aren’t afraid to say things on the mic that would get other WWE guys in trouble.  And if THAT weren’t enough, you have two guys that SO OBVIOUSLY hated each other.

Cena was shooting during those radio interviews where he called out The Rock for leaving WWE to become a movie star.  It wasn’t a matter of Rock being a “part timer”, it was a matter of Rock saying the WWE – the place that made him – was still his home, despite never actually visiting.  Cena’s trash talk got to the Rock on some level, and their promos against each other, especially as WMXXVIII drew close, cut pretty close to the bone.  Check this Cena promo out and tell me it’s not 100% shoot when he talks about Rock’s entourage and says the only reason he showed up for WMXXVII was to sell tickets to Fast Five and promote his new Twitter account:

Or this one, where Cena calls Rock a “self-centered, egotistical, see-through son of a bitch who wouldn’t give a rat’s ass if this place closed tomorrow” and then calls out Rocky for having notes for his promo written on his wrist:

Just watch The Rock’s physicality as Cena spouts off.  This is not a man waiting to say his next line – this guy is pissed.

Of course, Rock is no slouch on the mic either, and his promos tended to come off as more entertainment than shoot.  Still, saying John Cena’s official cologne smelled like “fear, fruity pebbles and possum piss” isn’t exactly treating Cena with kid gloves.

So all of this smack talk leads to WMXXVIII – live from the Rock’s hometown of Miami at a packed Sun Life Stadium.  The WWE Title would be on the line that night, as CM Punk defended against Chris Jericho in a very personal feud.  The World Heavyweight Title was also on the line, as Daniel Bryan defended against Royal Rumble winner Sheamus (the less said about that match the better).  As expected, both title matches would take a backseat to the true main event – the once in a lifetime match, Cena vs. Rock.

Every Wrestlemania main event has a slick video package, but Rock vs. Cena was so big that it got two.  It also got two live band entrances.  Clearly, this was a once in a lifetime thing.  Check out the awesome video packages below.  The Cena one gets me almost every time, portraying a guy who eats, sleeps and breathes WWE, while The Rock one shows a guy who appreciates his roots but lives a life far outside of it.  Great stuff.

John Cena makes the first entrance, with MGK playing “Invincible” to bring him out.  If you’ve never heard this track, it’s my pick for one of the two best WWE PPV themes ever (the other one is “My Way” by Limp Bizkit from WMX7).   The Rock comes out second, with Flo Rida doing a live version of “Wild Ones”.  Flo Rida – no doubt a future WWE Hall of Famer.

Cena and Rock are face to face in the ring and, if there’s ever been a hotter crowd, I can’t name it.  Unfortunately for John Cena, the loudest percentage is pro-Rock.  The two legends lock up as the crowd comes unglued.  Cena and Rock work a very old school style – testing each other with lockups.  It’s a great intro to the match.  Rock gets the better of the situation, showing Cena that the old Bull still has a lot to offer.

The match goes back and forth, with The Rock finally teasing a sharpshooter.  Cena fights out and the action spills outside the ring.  They work the announce table and the barricade, with Rocky taking a nasty bump to kill his ribs.  Cena takes it back to the ring and works those ribs with moves like a bear hug, but Rock mounts a comeback and teases a People’s Elbow.  Cena pops out though and begins his old standard FIVE MOVES comeback sequence, ending with a Mania-worthy Five Knuckle Shuffle (gee, that move sure reminds me of someone else’s move, hmm).

Cena sets up Rock for an Attitude Adjustment, but Rocky fights out and the two end up with the ol’ Warrior/Hogan double clothesline spot.  I mean, this is Wrestlemania.  As the pair get up, we get boo/yay punch trades.  Rock rocks Cena, but then John hits an AA out of nowhere.  This being Wrestlemania, the first finisher only gets a 2-count.  Rock’s up and hits his own Rock Bottom, but Cena kicks out at 2, too.

Cena and Rock go at it some more, culminating in Cena’s big top rop legdrop move (does this move have a name? Wiki calls it a diving legdrop bulldog, but, come on).  The diving legdrop bulldog gets a 2-count, so John sets up for another AA, but Rocky counters and locks in a sharpshooter.  Cena makes the ropes, so Rock drags him to the center of the ring and bashes the snot out of his face, then locks on the sharpshooter again.  Cena makes the ropes AGAIN, and this time rolls to the apron.  Rock takes him outside and throws him into the ring steps.  He rolls him back in, but then Cena hits a sunset flip into the STF out of nowhere.

Rock lasts in the STF for somewhere around 76 minutes without making it to the ropes or tapping.  Rock is in the STF longer than I can tolerate just sitting in a normal chair.  Eventually Rock just passes out from the pain (or falls asleep because he’s so comfy).  The ref teases the KO, but Rock’s arm is up before the third drop. WAKEY WAKEY! 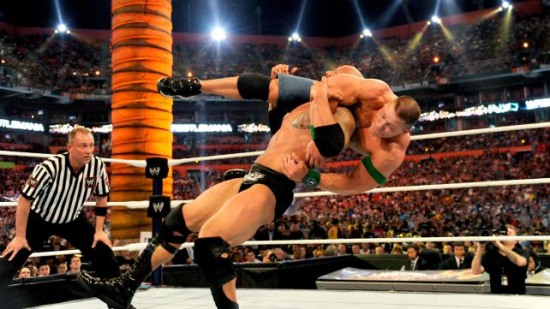 A samoan drop takes both men down, and now the crowd is going nuts as they can sense we’re taking it home.  After some teasing, Rock hits the spinebuster and then the match’s first People’s Elbow, but Cena kicks out at 2.  The pair then fight to the corner and up top, but Rock shoves Cena off.  The Brahma Bull grows wings and tries to hit a crossbody, but Cena rolls through for another awesome AA (maybe the first time Cena did that spot).  Rock kicks out at 2 and the crowd is losing their mind.

Cena, sensing this is the end, teases the Five Knuckle Shuffle, but then gets cocky and decides to steal the People’s Elbow instead.  John bounces off the ropes, but Rock kips up and Cena eats crap with a second Rock Bottom.  1-2-3 and Rock has unbelievably defeated Cena! In the end, the crowd cheers loudly as Rock celebrated in the ring.  In an iconic image, Cena sits on the ramp looking on in utter disbelief.  This match completely lived up to its epic build.  Everything about it felt “main event” and, perhaps even more than Rock/Hogan at WMX8, you felt like you were watching the two greatest of all time go head to head in, yes, a dream match.

The next night on Raw, Rock would praise Cena for his hard fought match, and announce he was back in the WWE and gunning for the WWE Title.  He wouldn’t appear on WWE TV again until July.  Cena, in the meantime, would go on to feud with the Raw GM and a returning Brock Lesnar.   The once in a lifetime match was over and would never happen again…until the very next Wrestlemania.