Oh boy. We’ve waited a long time for this one, and it’s been a crazy journey.  We’re finally getting into the REALLY hard to find Hasbros. Unfortunately, some of my original collection was lost, and some I just never bought.

Which translates to, holy butt balls, did I spend a lot of money on these next few columns. Was it worth it? I think Stone Cold would say it best.

In case you’re new to the column, we’ve been going back and taking a detailed, series-by-series look at the WWF Hasbro figures from the early 1990’s.  It’s one of the most beloved line of figures of all time, so much so that Mattel launched a line of tribute “Retro” figures last year.

If you haven’t gotten around to it, go ahead and check out all of the previous entries!

Now let’s get to it!

I can’t believe we’ve finally made it here.  Hasbro WWF Series Eight figures were released in 1994, the first of FOUR series that would hit stores that year.  Sadly, it would also be the last year of the line’s production.  So I guess it’s a good thing we went out with a flurry of new releases.

Series Eight is packaged on red cards, which I prefer over the yellow cards from Series Seven.  But enough of that, let’s take a look at the figures!

We’re kicking things off with the Total Package.  Lex Luger made waves when he said goodbye to WCW in 1992 and joined…the World Bodybuilding Federation?  Yeah, but when the WBF went belly up, Lex made his big WWF debut at the 1993 Royal Rumble. Lex entered WWF as the egotistical Narcissist with Bobby “The Brain” Heenan by his side.  He’d go on to have a fairly memorable feud with Mr. Perfect.   A few months later, he’d turn face, don a pair of red, white and blue workout pants and become the All-American.

That means that, by the time this Narcissist figure hit stores, Lex had already left the gimmick in the dust.  Lucky for us it’s immortalized in four inches of plastic.

First, can we just address the elephant in the room? What’s the deal with Lex’s eyebrows? Real life Luger’s eyebrows were a touch darker than his blonde hair, but this figure’s eyebrows are basically black and take up approximately 37.4% of his face.  It’s a bit much.  His mullet is off, too, and kind of plastered to the back of his neck.

Lex’s Real Wrestling Action is the Narcissistic Knockout, which is the same double pull and release arms the line has been using since S1 Hulk Hogan.  It’s a good action for any wrestler who relies on strength, and that suits Lex to a tee.

I didn’t have Lex as a kid. We already had the WCW Galoob Lex, which was a notch better than Hasbro’s offering.  Lex’s Narcissist gear kind of sucks unless you are just crazy about purple triangles.  I prefer the basic blue trunks from the WCW days.  A “Lex Express” era Lex would have been way cooler.  Rumor has it that Hasbro had an All-American Lex in the works when they pulled the plug on the line.

I had to hit up eBay for the Lex Luger pictured.  I picked this guy up for $18.99, which explains why his head is so faded.  Bargain basement prices!

The Hitman makes his return in Series Eight with a repaint of the S4 Hitman.  If you’ll remember, I had a lot of problems with the head mold from Series Four, so merely repainting that figure just doesn’t do it for me.

I like the silver-colored sunglasses, but they still look like a giant silver blob on Bret’s face.  His head is still at an awkward tilt and he still looks like he’s melting as he’s looking up at the sun.

Actually, S8 Bret has clearly spent some time in the sun, as his skin is way tanner than S4 Bret.  It’s so much darker, S8 Bret may be a different ethnicity.

I do love the more detailed hearts and what have you on Bret’s gear, so I’m not going to rate this much lower than the S4 version.  It’s just a shame that the company’s biggest star at the time didn’t get himself a brand new mold.

S8 Bret is another “didn’t have it as a kid” figure, as we adhered to the rule of “don’t buy a second version of a wrestler just because he’s in different gear.”  I picked this guy up from a fellow Hasbro collector in the UK on Facebook for around £32 shipped. 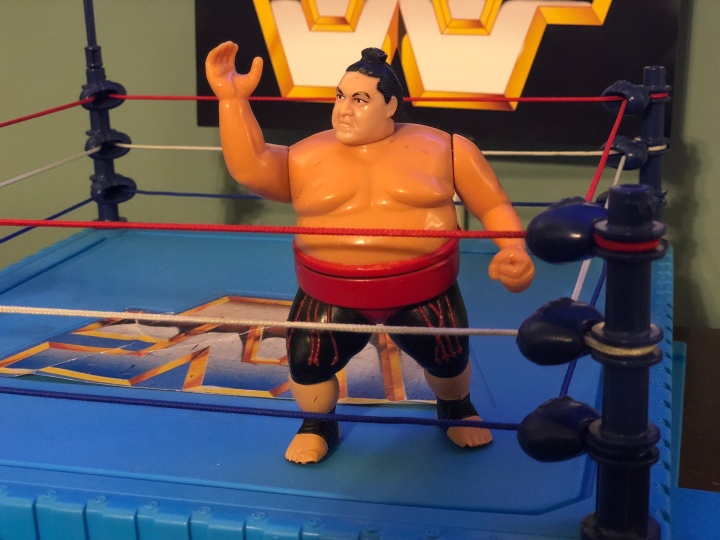 Yokozuna just may be the personal fav of Series Eight. He’s awesome.

Just months after his debut in 1992, Yoko won the Royal Rumble and went on to win the WWF Title at Wrestlemania IX.  By 1994, he was holding the WWF Title for the second time and had vanquished challengers like Hulk Hogan and The Undertaker. So yeah, the 500-lb sumo was a big deal.

Yokozuna makes his Hasbro debut here and boy is he glorious.  Like Andre The Giant, Yoko gets his own unique mold to reflect his sheer girth.  Yoko is in his sumo gear, complete with that sumo thong scarf thing, tied in a knot in the back. I’m also pretty sure the big guy is the only bare foot Hasbro to be released since S1 Superfly Snuka.

I still remember the feeling of excitement when we saw Yokozuna (and Bam Bam Bigelow) on the shelf at Huntington Mall Kaybee Toys all those years ago.  We didn’t even know they’d released a Yoko figure.  Needless to say, we took him home that day and I’m sure he had the MBWF Championship draped over his shoulder by nightfall.

Yoko’s RWA is the Sumo Smash, which is just another way of having pull and release arms.  I guess, after the all-new mold, they weren’t about to break the bank with a new action as well.  Still, that giant body had to have room for all kinds of crazy inner workings, right? 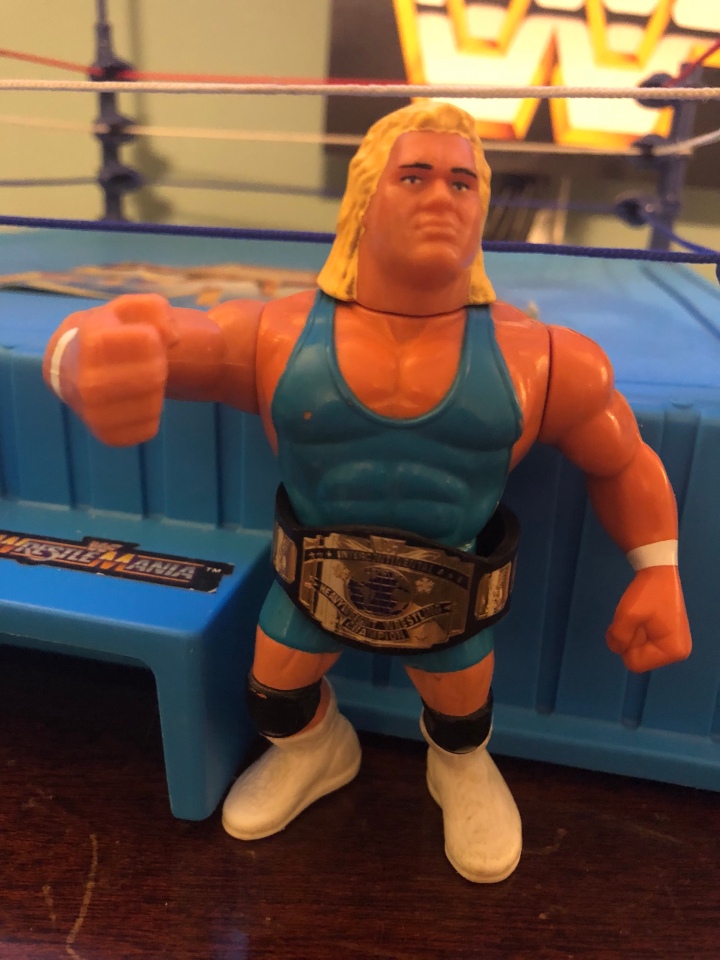 Mr. Perfect makes his second appearance in the line with another Series Eight repaint.  S3 Mr. Perfect was a near-perfect figure and remains one of my favorite figs in the entire line.

That said, I have mixed feelings about this version.  S8 Perfect is a mirror image of his S3 counterpart, only that mirror shows him in a blue singlet instead of yellow. That’s it, that’s the only difference. Same hair. Same Perfect Plex RWA.  It’s a clear cash grab and maybe the laziest repaint in the line since they changed “King” to “Man” on the butt of S3 Macho Man.  It reminds me of those uninspired WCW Series 2 repaints.

Ah, I can’t be mad. The singlet’s a really great blue color and, on the back, there’s a V shaped transition from blue to the old yellow color.  I like the variation, even if I had to pay $18 on eBay to get this second version. 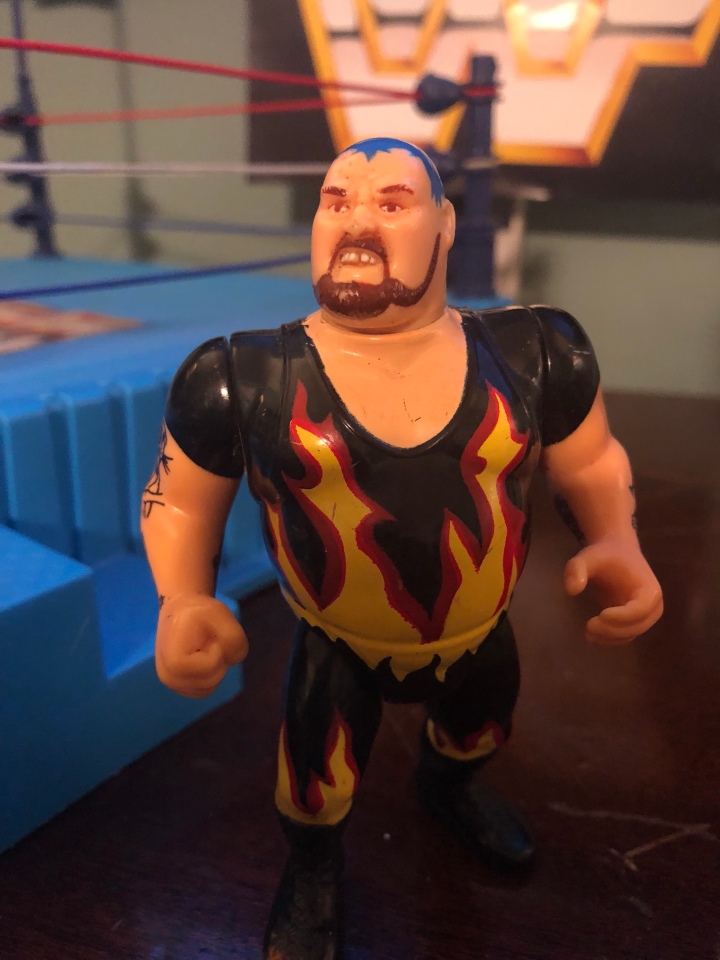 If it weren’t for the homerun Yokozuna, this Bam Bam would be my favorite figure in Series Eight.  He’s still one of my favorites in the line.

Bam Bam is a guy who never gets as much respect as he deserves, in my opinion.  Bigelow was a fixture in the late 80’s WWF.  He even teamed with Hulk Hogan in the main event of the first Survivor Series.

Bammer returned to the WWF in 1992 and feuded with notable guys like Big Boss Man and Doink The Clown.  He would go on to main event Wrestlemania XI against NFL star Lawrence Taylor.

All that is to say we REALLY needed a Bam Bam Bigelow figure.  For old school fans and 90’s kids.  And boy does this deliver.  Bam Bam uses the same mold as heavy hitters the Natural Disasters, but honestly this fig kicks the crap out of those guys.  It’s the little details – the flames on his head and gear.  How can you not rule when you’re covered in flames???

Bam’s Real Wrestling Action is the Bam Bam Slam because of course it is.  Hasbro gets paid by the Slam.  The Bam Bam Slam is, you guessed it, double pull and release arms, which means 3 of the 6 Series Eight figures are using that gimmick.  Come on!

Pictured is our original Bam Bam figure, which we picked up all those years ago at the Huntington Mall.  If only I could go back in time and grab the other Series Eight figures off of that wall to keep from paying 2018 eBay prices.  For instance… 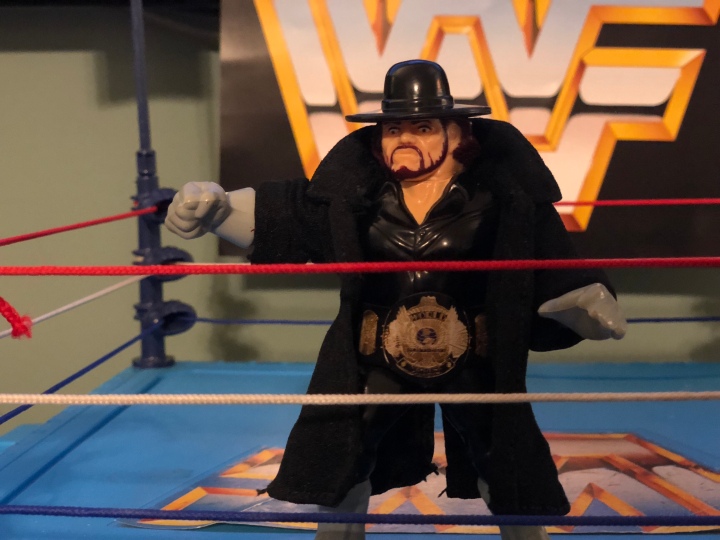 And that brings us to the final figure in Series Eight and, perhaps, one of the crown jewels of Hasbro collectors outside of Series Eleven.  I’m talking about S8 Undertaker.

Like Bret Hart, The Undertaker makes his return after debuting in Series Four.  You can barely call S8 Taker a repaint, but that’s what he is.  The S8 Undertaker has darker hair and lacks the mascara on his eyes.  So why oh why is this repaint, who is nearly identical to the original, so sought after?

It’s that coat bro.  LOOK AT THAT THING! GLORIOUS!

Taker is actually the second Hasbro figure to be packaged with a cloth accessory, following The Berzerker.  While Berzerker’s cloak was a crummy piece of cheap cloth with a hole cut in the middle, Undertaker’s coat is fitted – hemmed sleeves and a thick black cloth.  It’s like Taker shops at Macy’s and Berzerker shops at the Dollar Store.

I usually rate repaints a point or so lower than their original versions.  Not this guy.  Not with that coat.  Not for what I paid for him.  And I paid a LOT. A LOT.  Let’s just say he’s the only figure I keep in plastic and don’t play with.

In spite of being half repaints, Series Eight comes at you HARD.  The three wrestlers making their debut here are all essential based on reputation.  Lex, Bam Bam, and Yokozuna – all three are Wrestlemania MAIN EVENTERS.  What more can you say?

The Bret repaint is an improvement over the original and the Mr. Perfect repaint, while not straying far from the original, is very nice looking.  Then you’ve got The Undertaker and that coat, which was an upgrade over a figure that was already an A+.

Tough to pick a favorite, but I’m gonna have to go with Yokozuna.  He’s just so unique.  Dark horse is Bam Bam, who didn’t have to be awesome but he still is.  Weakest of Series Eight is probably Bret Hart, who isn’t even that bad.

Note: S8 Yokozuna would return as a repaint in Series Eleven.

Thanks for reading about Series Eight and a big thank to everyone who has been waiting as long as I have for this article to come out.  It took me a very long time to find a palatable price for S8 Undertaker.  FYI, I never found one, but at least I got one in such cherry condition.

Luckily, I have Series Nine and Ten already in the bag, so it won’t be long until WWF Hasbro Memories returns with even more 90’s WWF goodness.  See you soon!

Big thanks to “The Legend” Danny Cage over at Hasbromaniacs.com for the fancy retro belts and the old school WWF backdrop.